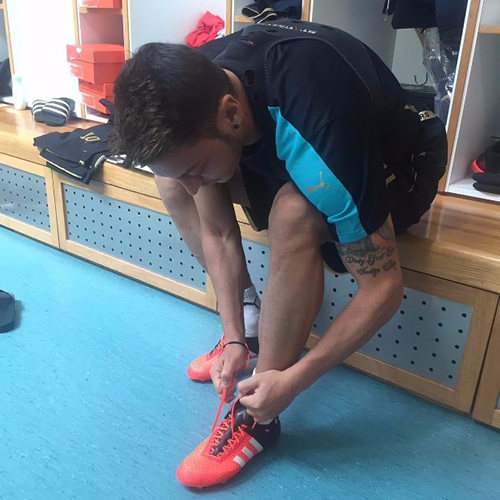 Mesut Ozil has declared himself ready for Arsenal’s vital Champions League clash against Olympiakos at The Emirates on Tuesday night.

The Gunners are looking to return to winning ways in Europe’s elite club competition after they suffered a 2-1 loss to Dinamo Zagreb in their first group outing earlier this month.

The north London side warmed up for their crucial European game with a 5-2 victory over Leicester City at King Power Stadium.

And Germany international Ozil is clearly looking forward to lining up for the north London side at Emirates Stadium this week.

Ozil wrote on the photo-sharing app: “My new footwear fits perfectly well! Now I’m all ready to take on the second matchday of the #UCL 👌💪😊 #AFCvOLY #ace15 #primeknit #bethedifference @adidasfootball”

Olympiacos are in the group stage for the 17th time and fifth in succession and the Greek side lost 3-0 at home to Bayern Munich on matchday one.

Cesc Fabregas: Chelsea are not a bunch of babies