The Arsenal striker shows off his new Adidas boots 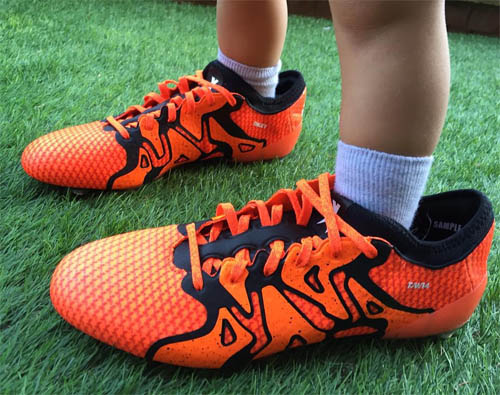 Theo Walcott has had some big boots to fill this season after replacing Olivier Giroud in the Arsenal starting line-up.

So far, the England international has done a pretty good job after scoring three goals in his last four games in all competitions, justifying his inclusion ahead of the France international.

But it was Walcott’s one-year son Finley who was doing the boot filling on Monday night as the Arsenal star’s first child tried on the 26-year-old’s new Adidas boots.

The Gunners striker, who was linked with a move to Liverpool in the summer before he signed a new long-term Arsenal deal, scored the north London side’s equaliser in a 5-2 victory over Leicester City at King Power Stadium on Saturday afternoon.

Arsene Wenger’s side face Greek champions Olympiacos in the Champions League at The Emirates on Tuesday night following a 2-1 loss to Dinamo Zagreb in their group-stage opener.

Cesc Fabregas: Chelsea are not a bunch of babies