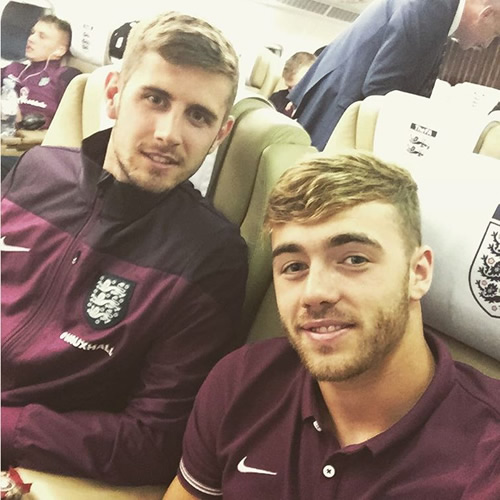 Calum Chambers looked in good spirits as he and Jack Stephens tuned into some episodes of Entourage after England’s Under-21 side sealed a 1-0 win in Norway.

The Arsenal starlet was involved as Gareth Southgate’s side made a winning start to their Euro 2017 qualifying campaign thanks to Southampton midfielder James Ward-Prowse’s first-half penalty.

Chambers sat next to Southampton man Stephens on the flight back to the UK and the pair looked cheery as they prepared for a marathon of the popular US show.

Chambers shared the photo above on his personal Instagram account and wrote: “Home time with my boy @jackstephens27 Entourage the whole way 🎬”

The defender will now turn his attentions back to club affairs as Arsenal gear up for this weekend’s home clash against Stoke City at Emirates Stadium.

The Gunners are currently sixth in the Premier League table after taking seven points from their opening four top-flight games.

The 20-year-old has made one Premier League appearance for Arsenal so far this season, during the goalless draw with Liverpool.