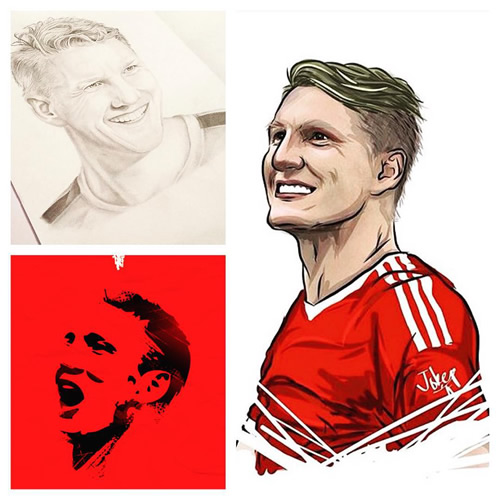 Bastian Schweinsteiger has taken to social media to show off some of the amazing artwork featuring the Manchester United midfielder sent in by his fans.

The World Cup winner is already proving a popular figure amongst the Red Devils faithful following his transfer to Old Trafford from Bayern Munich during the summer transfer window.

The 31-year-old midfielder has started three of United’s five Premier League games so far this season and also played the full 90 minutes in the Red Devils’ Champions League group-stage opener against PSV Eindhoven in midweek.

And the former Bayern Munich star used his personal Instagram account to thank his fans for some of their pictures and drawings.

Schweinsteiger posted the pictures above on the photo-sharing app on Friday afternoon and wrote: “Some of my favourite fan art. Thank you for the support!”

The German will be hoping to feature when United return to Premier League action this weekend with a trip to Southampton on Sunday afternoon.

The Red Devils are currently second in the table and five points behind early leaders Manchester City.