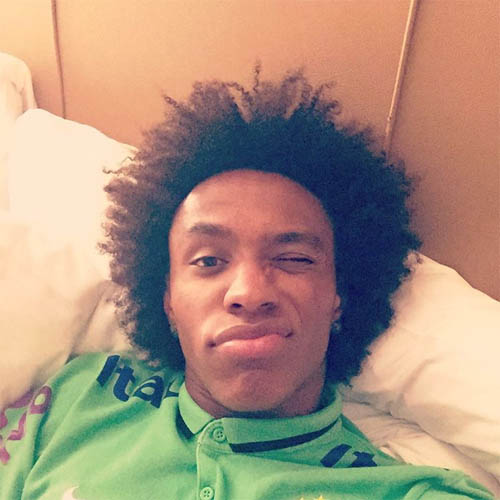 Willian was clearly in a good mood on Sunday night after the Chelsea midfielder snapped a notably chirpy selfie.

The 27-year-old midfielder is part of Dunga’s Brazil squad that eased to a 1-0 victory over Costa Rica in a friendly at the Red Bull Arena on Saturday night.

Willian could face USA in Boston on Tuesday night before the midfielder returns to England ahead of Chelsea’s trip to Everton in the Premier League on Sunday.

And the Blues forward was philosophing about life last night as the Brazil international posted the above snap and a thoughtful caption.

Willian wrote on his Instagram page: “One day you’ll still look back and see that the problems were actually the STEPS that led you to WIN . ” 😉 good night !!!”

The former Shakthar Donetsk winger is still waiting to score his first Premier League goal of the season after two appearances.

Willian moved to Chelsea in a £25m deal from Anzhi Mackhachkala despite reported interest from Liverpool.