Photo: Chelsea star catches up with his ‘bro’ after Porto defeat 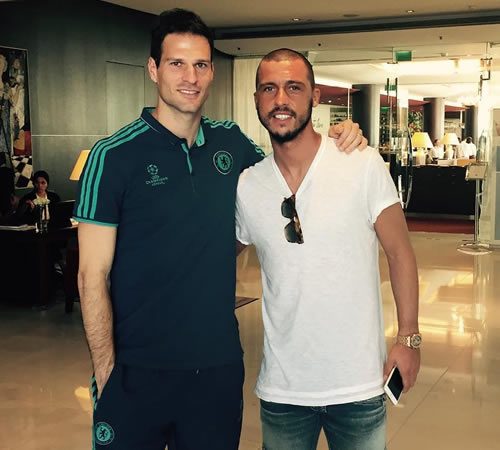 Asmir Begovic managed to find something positive after Chelsea’s disappointing 2-1 defeat by Porto in the Champions League on Tuesday night as he found the time to catch up with his Bosnia team-mate Haris Medunjanin.

The Chelsea goalkeeper was powerless to prevent the Blues from slipping to a European defeat away in Portugal as the west London club’s stuttering start to the season continued.

Begovic posted the picture above on his personal Instagram account on Wednesday afternoon and wrote: “Good to catch up with my bro @nejeditrice yesterday. 👊”

The Bosnian goalkeeper has been called upon in recent weeks after number one choice shot-stopper Thibaut Courtois suffered a serious knee injury and underwent surgery.

Begovic is likely to line up for the Blues for the foreseeable future, with Courtois expected to be out of action for a number of months.

Chelsea return to Premier League action with a home clash against Southampton this weekend. The Blues are currently 15th in the table after winning just two of their opening seven games.