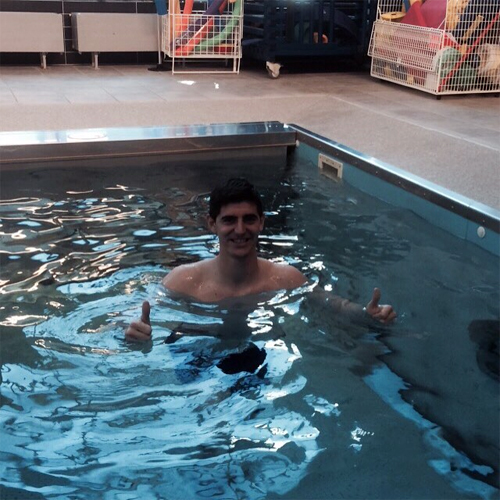 Thibaut Courtois looks to be on the road to recovery after the Chelsea goalkeeper gave an update on his fitness on Instagram on Monday afternoon.

The Blues goalkeeper went under the knife earlier this month after suffering a knee injury in training, with the Belgium international expected to be out of action for a number of months.

But Chelsea number one Courtois appears to be making steady progress in the gym after the 23-year-old shot stopper posted a chirpy photo from a rehabilitation session in a swimming pool.

Courtois wrote on his Instagram page: “Starting a next step of rehabilitation in the swimming pool. For now just 🚶🏻 🔜🏃🏻! #CFC #workhard #comebackstronger 💪🏼”

Chelsea came from 2-0 behind to recover a 2-2 draw with Newcastle United at St James’ Park in the Premier League in Saturday’s late kick-off.

Jose Mourinho’s remain in 15th place following their stalemate with the Magpies.

The west London side face Portuguese side Porto in the Champions League on Tuesday night.