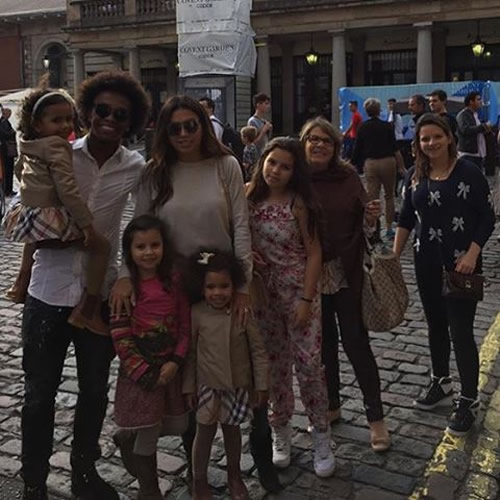 Willian shared this picture on Instagram on Saturday Photo: Willian/Instagram

Willian was all smiles as he enjoyed some family downtime after watching his Chelsea team-mates seal a 2-0 win over Arsenal at Stamford Bridge on Saturday afternoon.

The Brazilian missed the game through injury but watched on from the stands as goals from Kurt Zouma and Eden Hazard handed the Blues victory over the 10-man Gunners, after Gabriel Paulista and Santi Cazorla were both sent off.

Willian enjoyed spending some time with his family in Covent Garden after the game – and he posted the picture above on his personal Instagram account on Saturday evening.

He shared the picture and wrote: “Walking around!!!”

Zouma headed in the opener in the 53rd minute in west London from a Cesc Fabregas free-kick, before Hazard fired home with a shot that went in off Calum Chambers in stoppage time.

Gabriel was sent off in the first half for flicking his heel at Diego Costa, who was lucky not to see red himself for a swipe at Laurent Koscielny.

Arsenal were then reduced to nine men when Cazorla was shown a second yellow card for a late tackle on Fabregas late on at Stamford Bridge.