Photo: Chelsea’s Cesc Fabregas all smiles with Pedro on plane to Newcastle

Cesc Fabregas and Pedro look in good spirits ahead of Chelsea's trip to Newcastle... 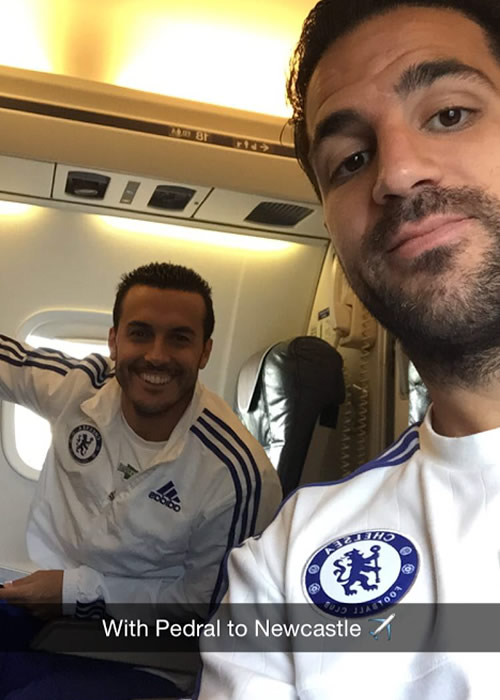 Cesc Fabregas looked in good spirits as he snapped a selfie with Pedro Rodriguez on Friday evening as Chelsea jetted off to Newcastle United ahead of their Premier League clash.

The Blues head to St James’ Park looking to make it back to back wins in the top flight after their dramatic 2-0 triumph over Arsenal at Stamford Bridge last weekend.

Fabregas snapped the picture above and uploaded it onto his personal Snapchat account as the west London side look to secure victory against the Magpies.

Newcastle’s recent record against Chelsea is impressive, with the Magpies having won their last three home matches against the west London side.

However, Steve McClaren’s men have been struggling for form and head into Saturday’s game in 19th place in the Premier League with just two points from their opening six top-flight clashes.

Chelsea, meanwhile, are 15th, after having taken seven points from their first six games.

Paul Merson: Why Liverpool will scrape to victory over Aston Villa