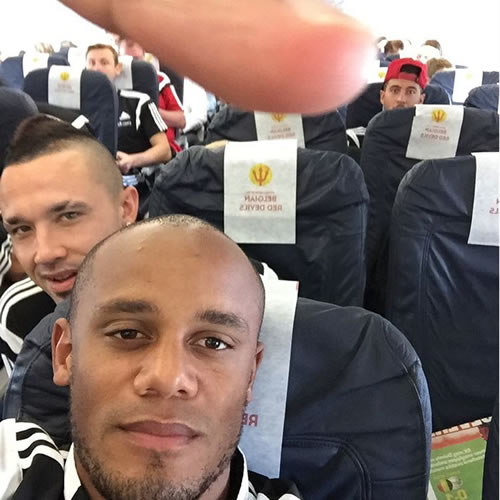 Eden Hazard was clearly in a playful mood on Monday afternoon after his winning goal for Belgium against Cyprus in their Euro 2016 qualifier on Sunday.

The Chelsea playmaker handed his country a 1-0 win as they took a step closer to securing their spot at next summer’s tournament in France.

Hazard poked fun at his international team-mate by snapping a picture of himself next to the Manchester City man as he dozed on the plane back to Belgium.

And the 24-year-old couldn’t help but get in on the action as Manchester City captain Kompany vowed to get his own-back on the Chelsea star.

Kompany shared the photo above on his personal Instagram account and wrote: “This guy will get it. @hazardeden_10”

Hazard will be expecting to feature when Chelsea return to Premier League action against Everton at Goodison Park on Saturday lunchtime.

The Blues have endured a stuttering start to the new season, with Jose Mourinho’s men having only picked up four points from their opening four games.

The west London side slumped to a surprise 2-1 loss to Crystal Palace at Stamford Bridge in their most recent Premier League outing.