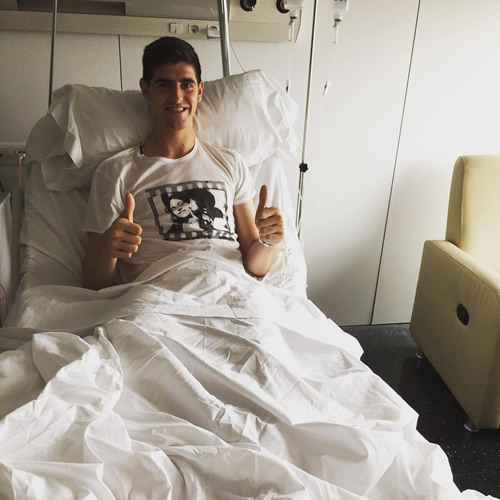 Thibaut Courtois took to social media to thank his fans for their support after the Chelsea goalkeeper underwent successful knee surgery on Thursday.

The shot-stopper has been ruled out of action for a number of months after suffering the injury in training on Wednesday.

Courtois shared the picture above of himself in his hospital bed on his personal Instagram account and wrote: “Thank you everyone for the support and the good wishes! I will work hard to recover as soon as I can! 💪🏼 #cfc”

A statement posted on Chelsea’s website on Friday read:” Thibaut Courtois underwent surgery yesterday on an avulsion of the posterior corner and medial part of the internal meniscus of his right knee.

“The successful surgery consisted of a reattachment of the meniscus by suturing.”

The news means that summer signing Asmir Begovic is set to start in goal for the west London club in Saturday’s clash with Everton at Goodison Park.

Chelsea head into Saturday’s game looking to return to winning ways in the top flight after slumping to a surprise 2-1 loss to Crystal Palace in their most recent outing before the international break.

The defending champions are already eight points behind early pace-setters Manchester City, who lead the way at the top of the Premier League table.