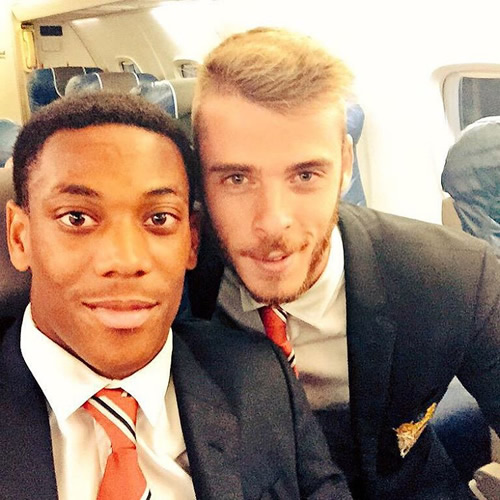 David De Gea took to social media to heap praise on Anthony Martial as the teenager helped to fire Manchester United to a thrilling 3-2 win at Southampton on Sunday.

United fell behind in the 13th minute when Graziano Pelle smashed home a loose ball after David De Gea’s superb save.

But Martial drew the Red Devils level 10 minutes before half-time with a neat turn and shot.

The 19-year-old summer signing from Monaco then took advantage of Maya Yoshida’s poor backpass to slot in a second five minutes after the break.

Juan Mata added a third in the 68th minute, before Pelle headed in a late second as United held on.

De Gea looked to be in good spirits as he posed for a picture with Martial on the plane as Louis van Gaal’s men headed back to Manchester.

The Spanish shot-stopper shared the photo above on his Instagram account and wrote: “These three points are thanks to the whole team’s effort. Top Anthony Martial! C’mon @manchesterunited!”

Sunday’s win lifted United up to second in the table and two points behind leaders Manchester City.