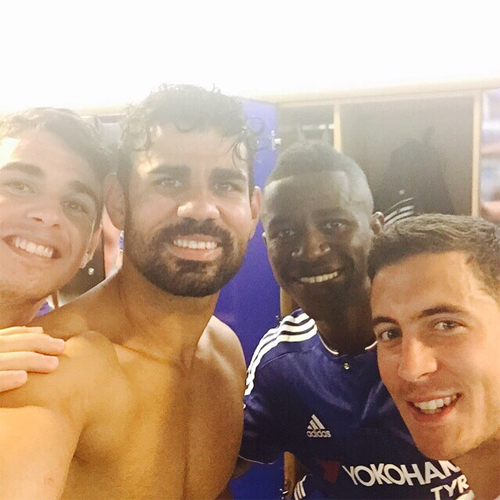 Diego Costa managed to cool off for a dressing room selfie after a fiery display in 2-0 victory over Arsenal.

The Chelsea striker provided the main talking point of the match after he took a swipe at Arsenal defender Laurent Koscielny following a clash in the first half.

Gunners centre-half Gabriel Paulista became involved in the scuffle and the Brazilian paid the price for losing his composure after he was sent off for kicking out at Costa.

And Costa was all smiles as he posed with Oscar, Ramires and Hazard in the Chelsea dressing room following the final whistle at Stamford Bridge.

Costa wrote on his Instagram page: “Great win today!. Thank you for your amazing support!”

Costa has scored two goals in seven appearances in all competitions for the defending Premier League champions this season.