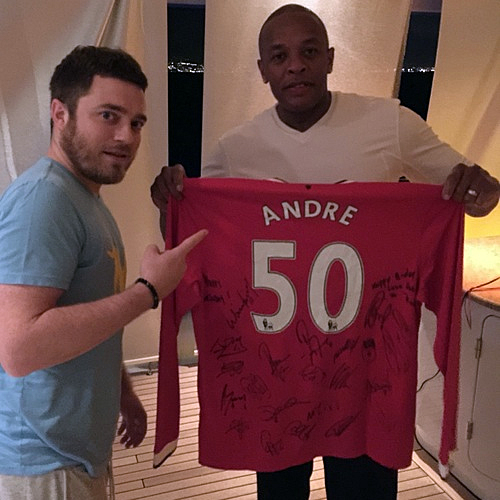 Manchester United have many famous fans all over the world, including the likes of star sprinter Usain Bolt and One Direction singer Harry Styles.

Now, it appears that the Red Devils can add rap star Dr Dre to their list of celebrity supporters, after he was presented with a signed United shirt to mark his 50th birthday.

Dre was given the shirt by Charlie Parish, a film director and lifelong Red from Manchester who has spent most of the last 10 years out in LA.

The rapper invited Charlie to celebrate his 50th birthday aboard a private yacht and the United fan organised for Dre to be presented with a signed Red Devils shirt.

“Through a friend close to United, I arranged for the players to sign a shirt and they knew it was for Dre, so many of them wrote personal messages as they’re big fans of his music and headphones,” Parish told United Review.

“When I presented the shirt to Dre, he was genuinely shocked that a football club would go to so much trouble just for him. He loved it and said he’d frame it in his house.

“He’s a big sports fan and although I can’t quite say he’s a United fan, he respects the sport and loved the gesture. He knows I’m a massive Red and I like to keep him informed, telling him about our latest results and performances.

“Knowing and working with somebody like Dre is a massive privilege for me because of what he has achieved, whether that is in music, film or business. And despite his success, and fortune, he is all about creativity and basically surrounds himself with like-minded people.

“It can sometimes be surreal to be in his company, or with somebody like Snoop , but I love it. I’m trying to convert them into Reds!”

Parish had worked on movies such as From Hell and The Book of Eli and was filming at the Eminem show at Wembley where he first met Dre.