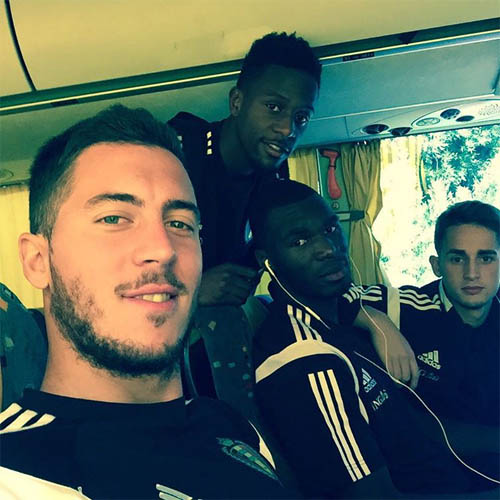 Eden Hazard snapped a selfie with Liverpool strikers Christian Benteke and Divock Origi as well as Manchester United youngster Adnan Januzaj after a 1-0 win against Cyprus on Sunday night.

The Chelsea winger scored a dramatic 86th-minute winner in Nicosia to deny Wales their place at Euro 2016 for now after the Group C leader played out a goalless draw with Israel in Cardiff.

Benteke was replaced by Reds team-mate Origi at half-time, while Januzaj, who moved to Borussia Dortmund on a season-long loan from United, was an unused substitute.

And a particularly chirpy Hazard uploaded a snap of the quartet on his Instagram page following their Euro 2016 victory on Sunday night.

Second-placed Belgium are one point behind Wales, with Marc Wilmots’s side and Chris Coleman’s men in pole position to secure the two automatic qualifying spots in Group C.

Wales face Bosnia-Herzegovina in their next game and Belgium welcome Andorra.