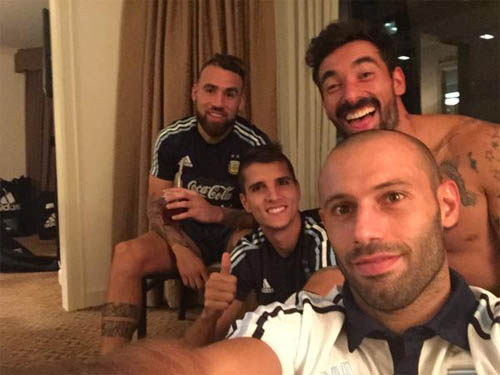 Otamendi completed a reported £40m transfer to the current Premier League leaders from La Liga side Valencia in the summer transfer window.

The 27-year-old centre-half was previously linked with a move to City’s bitter derby rivals Manchester United before Manuel Pellegrini landed his man.

And Otamendi may have been discussing the rigours of the Premier League after Mascherano spent four seasons in the English top-flight with West Ham and Liverpool, whilst Lamela is still attempting to salvage his Spurs career.

Lamela became Tottenham’s club-record signing when the 23-year-old midfielder moved to White Hart Lane in a £30.75m deal from Serie A side Roma in 2013.

The Argentina playmaker has scored just two goals in 38 Premier League appearances over two seasons for the north London side.