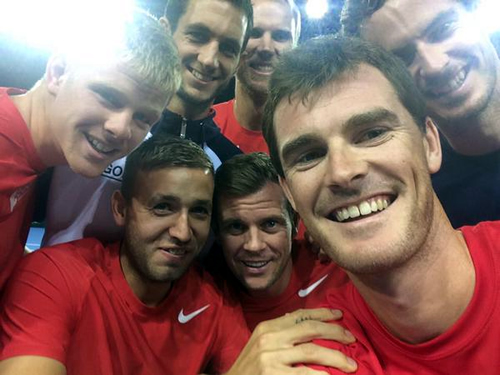 Andy Murray was all smiles as he posed for a picture with his Great Britain team-mates after helping his country reach their first Davis Cup final since 1978 with victory over Australia in Glasgow.

The British No1 beat Bernard Tomic 7-5 6-3 6-2 on Sunday to give the hosts an unassailable 3-1 lead and book their place in the showpiece.

Speaking after his victory on Sunday in Glasgow, Murray said: “Winning for your country and your team-mates means such a lot.

“The crowd were unbelievable from the first ball to the last. I didn’t feel great the whole weekend to be honest. I’ve been struggling with my back, but I just tried to disguise it.”

Asked about his back problems in his post-match news conference, Murray moved to play down fears about his fitness.

“It’s nothing to do with the issues like the previous issues,” he said. “Completely different thing. My back was absolutely fine through the US Open and all of that stretch, I took five days off and started practising again on Sunday here and felt fine during all those practices.

“Tuesday night, after I’d cooled down, my back was extremely sore. It got progressively worse the next couple of days. I didn’t feel it playing on Tuesday so I don’t know what happened.

“Sometimes after you have played a lot of tennis or lot of exercise and take a break, the muscles stiffen up a little bit and when you come back you can have some issues.”