Jose Mourinho’s son could be in big trouble with the Chelsea manager.

The 15-year-old, who currently plays as a goalkeeper for Fulham’s youth team, posted the above tweet during Chelsea’s 3-1 loss to Everton at Goodison Park on Saturday afternoon.

Unsurprisingly, some Blues supporters weren’t too happy with the teenager, who purports to be a Chelsea fan in his Twitter bio, after his ill-advised, poorly-timed social media post.

However, Mourinho’s son, who is named Jose after the Blues boss, took to Twitter to laugh off any suggestion that his tweet was in reference to Chelsea’s third defeat of the season.

Jose Jr has previously sparked controversy on Instagram after he defended Cesc Fabregas and branded Chelsea supporters a disgrace. 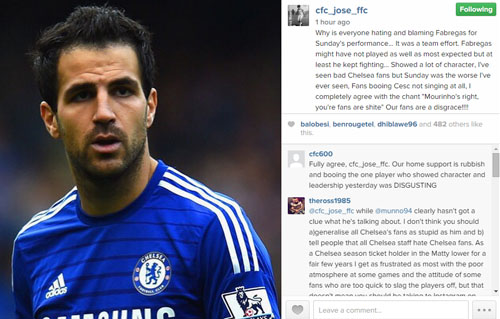 The Blues are languishing in 16th place in the Premier League table after collecting just four points from their opening five games of the top-flight campaign.

Santi Cazorla: Why I love playing with Francis Coquelin for Arsenal