Photo: Juan Mata all smiles with Arsenal and Chelsea stars

Juan Mata joins Cesar Azpilicueta, Santi Cazorla and David Silva for a selfie as the stars prepare for Spain's clash with Slovakia 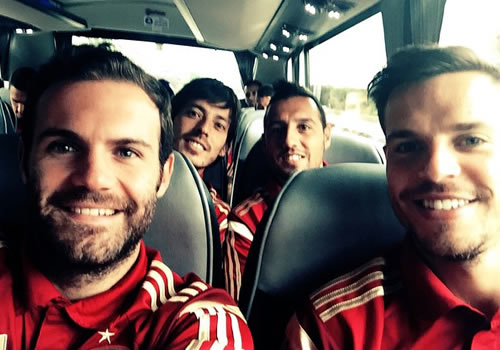 Juan Mata looked in good spirits as he posed for selfie with Cesar Azpilicueta, Santi Cazorla and David Silva as the Premier League stars prepared for Spain duty.

The Chelsea, Manchester United, Manchester City and Arsenal men are all included in the Spain squad as Vicente Del Bosque’s men gear up for their Euro 2016 qualifier against Slovakia on home soil on Saturday evening.

Azpilicueta shared the picture above of the Premier League stars all smiles on the Spanish team bus on his personal Instagram account on Friday afternoon and wrote: “Two Asturians, a Canary Islander and a Navarrese of the Premier League. All together tomorrow in a key match for the @sefutbol.”

The 26-year-old Azpilicueta has been a regular fixture in Jose Mourinho’s Chelsea team this season as the Blues endured a stuttering start to the new campaign.

The Spaniard scored as Chelsea won their only game of the season against West Bromwich Albion last month, with the west London side having only taken four points from their opening four games.

The Blues return to action with a tricky clash against Everton at Goodison Park on 12 September.

Three reasons why Liverpool won’t finish in the top four