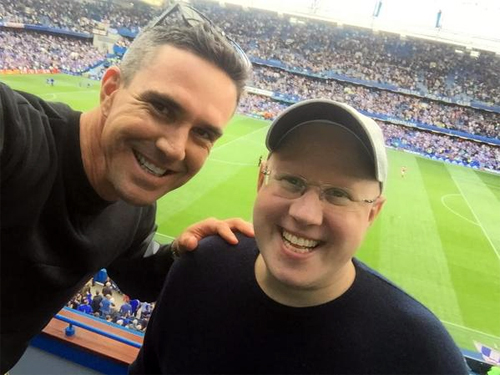 Kevin Pietersen and Matt Lucas would make good company for a football match.

The former England cricketer is an avid Chelsea fan, while comedian Lucas has made no secret of his love for Arsenal.

So naturally the pair got together to watch the London derby at Stamford Bridge on Saturday afternoon.

And Pietersen emerged the winner as Chelsea eased to a 2-0 victory, while the South African born cricketer also cheekily labelled Lucas a Blues fan.

Diego Costa was a key talking point from the 2-0 win after he clashed with Laurent Koscielny and Gabriel Paulista, resulting in the latter’s sending off.

The defending Premier League champions are three points behind Arsenal after their bad-tempered win against Arsene Wenger’s side.

The Blues make the trip to Newcastle United in their next Premier League fixture next Sunday.