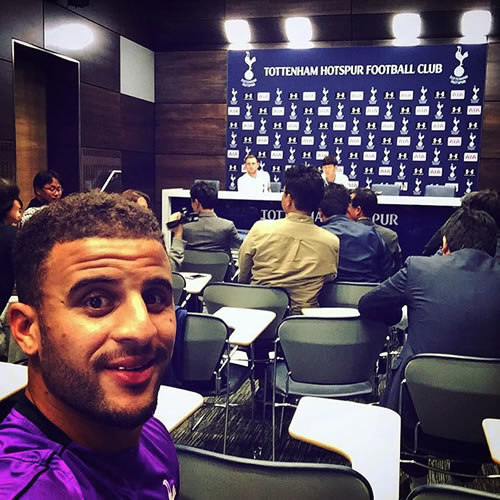 Kyle Walker was all smiles as he snapped a selfie during a Tottenham Hotspur news conference at the club’s training ground on Friday morning.

Son Heung-min was speaking to some of the gathered South Korean media following his impressive scoring performance during the 3-1 win over Qarabag in the Europa League at White Hart Lane on Thursday night.

Spurs defender Walker felt like joining his new team-mate, so he snuck into the news conference and snapped a selfie, before congratulating the South Korean on his stellar display.

England international Walker posted the picture above on his personal Instagram account and wrote: “Congrats to @son_hm7 on his first @spursofficial goals last night. Joined the South Korean media for a press conference with him #selfiewithson”

Tottenham, who are currently 12th in the top-flight table, return to Premier League action when they host London rivals Crystal Palace at White Hart Lane on Sunday lunchtime.

The Lilywhites recorded their first top-flight win of the season when they beat Sunderland 1-0 at the Stadium of Light last Sunday afternoon.

Photos: Sanchez, Walcott all smiles as Arsenal train ahead of Chelsea trip