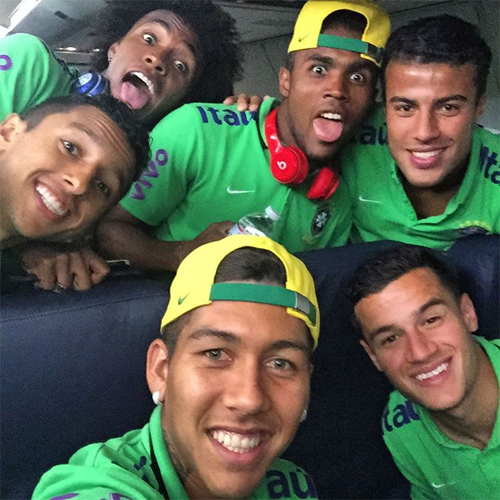 Philippe Coutinho and Roberto Firmino look to be bonding on international duty before the Brazilian duo return to Liverpool next week.

Firmino became Liverpool’s third most-expensive signing after he completed a £29m move to Anfield from Bundesliga side Hoffenheim in the summer transfer window.

The South American playmaker made his full debut in a goalless draw with Arsenal before he started their 3-0 defeat by West Ham United in their most recent game.

Coutinho, meanwhile, scored a brilliant winner in a 1-0 win at Stoke City in their opening fixture of the season before he received a red card against the Hammers.

But the Liverpool pair were all smiles as they were joined by their Brazil team-mates for a selfie, including Chelsea midfielder Willian.

Coutinho wrote on his Instagram page: “Leaving for Boston”

Dunga’s Brazil were unconvincing 1-0 winners against Costa Rica in their friendly at the Red Bull Arena on Saturday.

Brazil will face the United States on Tuesday in Foxborough, Massachusetts, as part of its two-game friendly American tour.