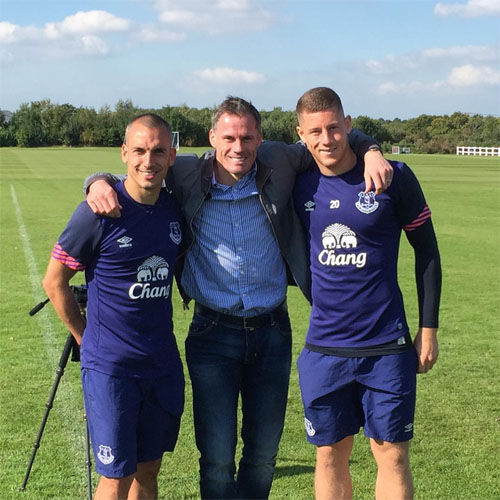 Jamie Carragher posed for a snap with Everton duo Ross Barkley and Leon Osman ahead of the Merseyside derby on Sunday afternoon.

Liverpool make the trip to Goodison Park after a mixed start to their Premier League campaign, securing a return of 11 points from a possible 21 after seven games.

Everton, meanwhile, hoisted themselves above Liverpool and into fifth place after a dramatic 3-2 victory over West Bromwich Albion at The Hawthorns on Monday night.

And Carragher was all smiles, for now at least, with the Everton pair after he interviewed Barkley and Osman for Sky Sports.

Carragher wrote on the photo-sharing app: “Spoke to two Blues today about the upcoming Derby, they fancy their chances! Interview will be on Sky Sports 1 on Sunday in the build up to the game.”

Barkley has enjoyed a promising start to the season after having scored two goals and making three assists in seven Premier League games.

Osman, meanwhile, is still waiting to make his first Premier League start of the season after being out-of-favour under Roberto Martinez.

Everton and Liverpool played out successive draws in both Merseyside derbies in the Premier League last season.

Diego Costa admits Chelsea are ‘not in a good moment’

Aaron Ramsey ‘would love’ to captain Arsenal in the future