Photo: Liverpool’s Lucas Leiva thanks Red legend for his gift 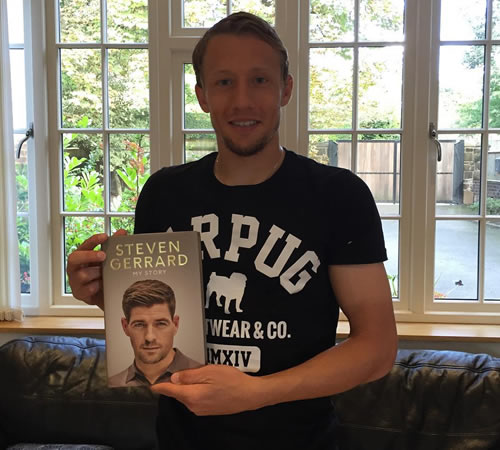 Lucas Leiva has taken to social media to pay tribute to Steven Gerrard after the Liverpool midfielder was sent a copy of his former captain’s new book.

Gerrard released his autobiography, My Story, this week after the veteran midfielder opted to call time on his spell on Merseyside and leave to join MLS outfit LA Galaxy.

Jon Flanagan was among the current crop of Liverpool stars to show off their new copy of the book, and Lucas looked delighted to have received the hardcover himself.

Lucas posted the picture above on his personal Instagram account on Friday afternoon and wrote: “A nice gift arrived today !!! Thanks @stevengerrard. #legend”

Lucas will be hoping to feature when Liverpool take on Aston Villa at Anfield on Saturday afternoon looking to return to winning ways in the Premier League.

The Reds head into Saturday’s clash with Tim Sherwood’s men in 13th place in the Premier League table after having taken eight points form their first six top-flight games.