Photo: Man United defender chills on the sofa with his dog 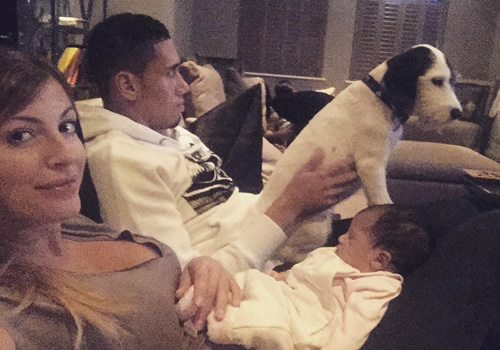 Chris Smalling looked to be completely relaxed on Sunday evening as he enjoyed some downtime at home after Manchester United’s 3-0 win over Sunderland on Saturday.

The 25-year-old defender played the full 90 minutes as goals from Wayne Rooney, Andreas Pereira and Juan Mata helped Louis van Gaal’s men claim victory over the Black Cats and move to the top of the Premier League table.

And Smalling looked chilled out as he watched some television with a dog on his lap on Sunday night as he made the most of his day off.

Smalling’s girlfriend Sam Cooke posted the picture above on her personal Instagram account and wrote: “Both with our babies

someone was a bit jealous

Manchester United are next in action in midweek when they host Wolfsburg in the Champions League group stage, before taking on Arsenal at Emirates Stadium in the Premier League next weekend.

The Gunners, who are fourth in the table, warmed up for that showdown with an impressive 5-2 win over Leicester City on Saturday afternoon.