Photo: Man United duo Schweinsteiger and Young all smiles ahead of PSV clash 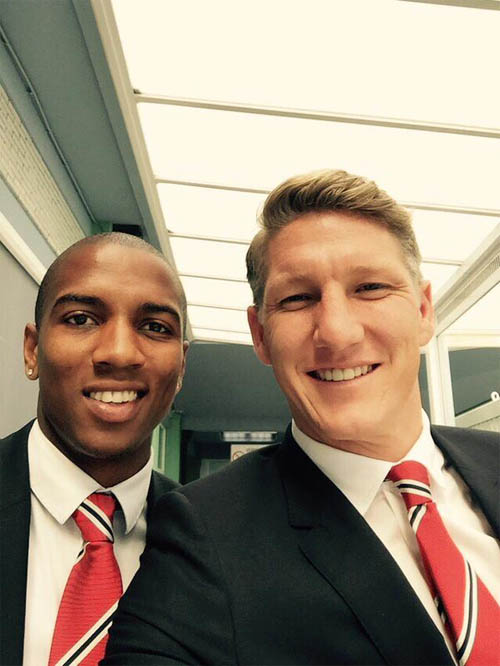 Bastian Schweinsteiger and Ashley Young were all smiles as Manchester United jetted off to the Netherlands ahead of their opening Champions League game.

The Red Devils face Memphis Depay’s former employers PSV Eindhoven in their opening game of the Champions League group-stage at Philips Stadion in the Dutch city on Tuesday night.

The three-time European Cup winners are fresh from a morale-boosting 3-1 win against bitter rivals Liverpool at Old Trafford in the Premier League on Saturday evening.

And Schweinsteiger, who celebrated United’s win over Liverpool with his brother on the Old Trafford pitch, posted a snap with Young on his Twitter page ahead of their Champions League clash.

We are looking forward to our first #UCL match against Eindhoven! @Youngy18 #mufc pic.twitter.com/NqVmrGM68w

Depay makes a swift return to his old stamping ground when his United side visit PSV Eindhoven – the club he left in the summer – for their opening Group B fixture.

United turned the tables with a 3-1 victory at Old Trafford where Scholes and Dwight Yorke struck late goals after Van Bommel had equalised a Teddy Sheringham strike.

Ryan Giggs, now Van Gaal’s assistant manager, played in both matches for United who ended up qualifying in second place, a point above PSV.