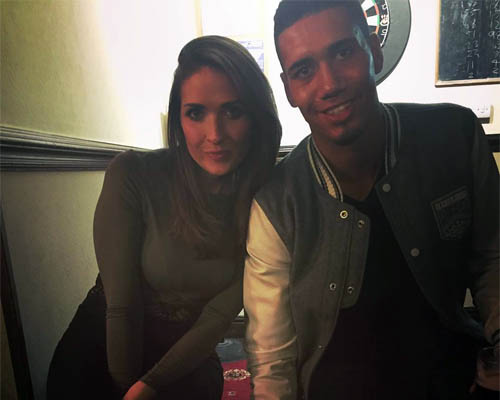 Chris Smalling headed to the pub with his girlfriend after Manchester United edged to a 3-1 victory over Liverpool at Old Trafford on Saturday evening.

The England international produced another mature performance alongside Daley Blind as the United centre-halves managed to keep Christian Benteke under wraps.

And United defender Smalling headed to his local pub with his page-three model girlfriend Samantha Cooke at a friend’s birthday party after their victory over their bitter rivals.

Smalling’s girlfriend posted the above snap and wrote: “Happy birthday to @jessyrose89 couple celebratory drinks in the pub 🎉🎉”

The 25-year-old defender has been ever-present in Louis van Gaal’s side at the start of the season.

Smalling has partnered Blind at centre-half for the Red Devils as United conceded just three goals in their opening five top-flight games.

The 20-time English champions climbed up to second place in the table after their 3-1 win.