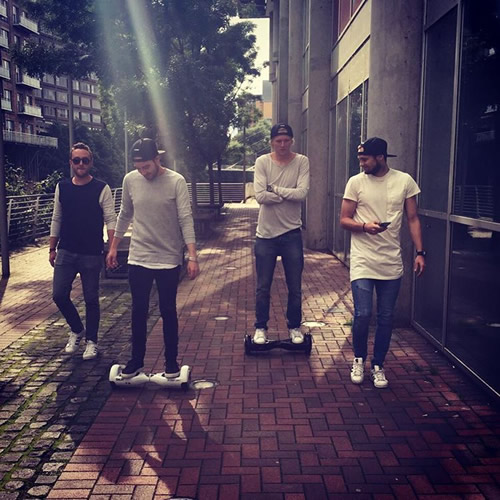 Daley Blind chilled out with his mates on Sunday Photo: Daley Blind/Instagram

Daley Blind enjoyed some downtime with his friends on Sunday after his man-of-the-match display helped Manchester United beat Liverpool 3-1 in the Premier League.

The Netherlands international scored United’s second-half opener with a curling finish to set Louis van Gaal’s men on their way to victory against their fierce rivals at Old Trafford.

Blind was joined by three of his friends as the gang went for a walk in Manchester on Sunday afternoon.

And the 25-year-old was clearly thrilled to be joined by his mates on his day off.

Blind posted the picture above on his personal Instagram account on Sunday evening and wrote: “Boys are back in town 👊🏻🔝 #Friends”

Blind, who joined United from Ajax last summer, will be expecting to feature when the Red Devils kick off their Champions League group-stage campaign away to PSV Eindhoven on Tuesday night.

The Red Devils then travel to Southampton in their next Premier League game on Sunday afternoon.