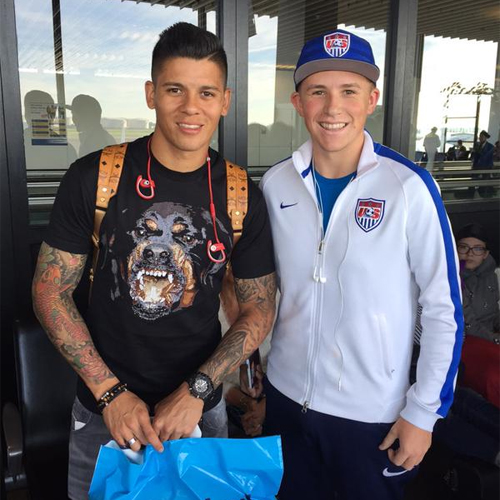 Marcos Rojo always has plenty of time for his fans.

The Manchester United defender met a group of Red Devils supporters ahead of their 2-1 defeat by Swansea City in the Premier League last month.

Rojo joined up with Argentina team-mates in United States for their 7-0 win against Bolivia last week followed by a 2-2 draw with Mexico in Dallas on Tuesday night.

After the stalemate, the 25-year-old centre-half headed back to Manchester as Louis van Gaal’s side gear up to face top-four rivals Liverpool at Old Trafford on Saturday.

And presumably during a stop-over in Amsterdam, Rojo made one fan’s Amsterdam trip extra special as he posed for an impromptu snap.

Seeing @marcosrojo5 in Amsterdam airport has made this trip even better! Thanks for the photo! #RojoIsRed #MUFC pic.twitter.com/llnTZmiErJ

The 25-year-old made 25 appearances in all competitions during his debut Premier League campaign, and it hoping to rack up many more should he be given a prolonged run at the heart of United’s defence.

Before making the £16m switch to the North West, Rojo shone for Sporting Lisbon and Spartak Moscow, and has amassed 37 Argentina caps to date.