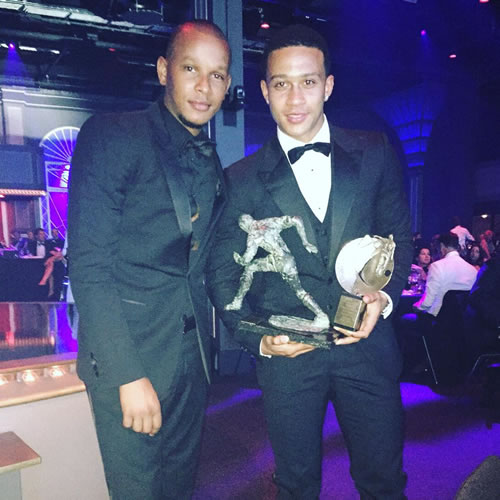 Memphis Depay was all smiles as he was presented with the Talent of the Year and Top Scorer awards by his former club PSV Eindhoven on Monday night.

The Netherlands international scooped the prizes before his summer transfer to Manchester United and was presented with the trophies this week.

Depay shared a number of pictures from the award ceremony on his personal Instagram account on Monday evening and wrote: “Thanks to my last trainer my old teammates and all the people around PSV.”

Depay has been a regular fixture in the Manchester United first-team since his transfer to Old Trafford from PSV earlier in the summer.

The 21-year-old has netted twice for the Red Devils – both times in the Champions League – and has also notched up four Premier League appearances for Louis van Gaal’s men.

He was booked as he played the full 90 minutes as United suffered a surprise 2-1 defeat by Swansea City in the Premier League on Sunday afternoon.

That defeat left the Red Devils on seven points in the top flight, level with Liverpool and Arsenal.