Brazil striker Neymar snaps a selfie with Liverpool duo Philippe Coutinho and Roberto Firmino, and his other team-mates 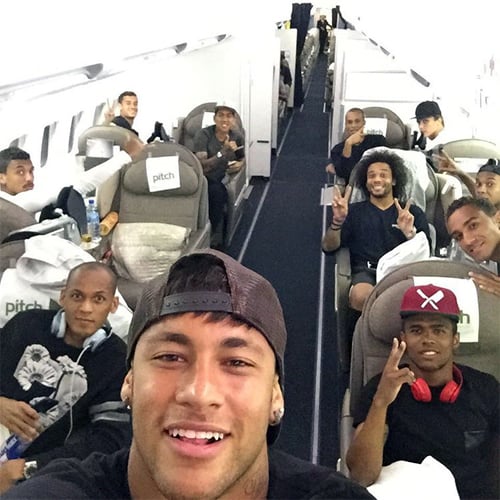 Neymar is no stranger to a selfie.

The Barcelona forward’s Instagram account is cluttered with selfie attempts and naturally Neymar was keen to document Brazil’s latest meet-up.

The 23-year-old remains a Barca player despite his agent admitting interest from Manchester United in the summer transfer window.

Neymar’s Brazil team-mates Philippe Coutinho and Roberto Firmino will face United at Old Trafford in their next Premier League game on Saturday evening.

But the duo looked relaxed as they managed to squeeze into shot for Neymar’s selfie, which the Champions League winner posted on his Instagram page.

Neymar wrote on the photo-sharing app: “Mission Accomplished !!!! It is now back home …. ✈️”

Firmino became Liverpool’s third most-expensive signing after he completed a £29m move to Anfield from Bundesliga side Hoffenheim in the summer transfer window.

The South American playmaker made his full debut in a goalless draw with Arsenal before he started their 3-0 defeat by West Ham United in their most recent game.

Coutinho, meanwhile, scored a brilliant winner in a 1-0 win at Stoke City in their opening fixture of the season before he received a red card against the Hammers.