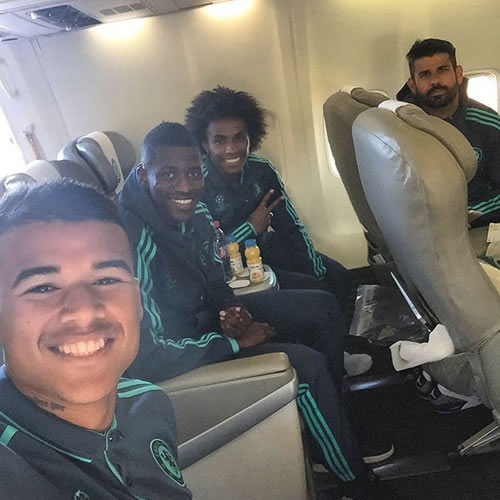 Kenedy looked in good spirits as he posed for a picture with Ramires, Willian and Diego Costa as Chelsea flew out to Portugal for their Champions League clash with Porto.

Jose Mourinho’s men are looking to continue their good start to their group stage campaign after their 4-0 win over Maccabi Tel-Aviv at Stamford Bridge earlier this month.

Costa is available for selection as his domestic ban does not come into play in Europe, and he looked in high spirits alongside his team-mates on the plane to Portugal.

Willian shared the photo above on his personal Instagram account on Monday afternoon and wrote: “Off to Porto ✈️ #UCL”

Chelsea have had the upper hand against Porto in recent seasons, with four victories in the previous six encounters. The west Londoners have won each of the last three – all by a single goal.

They last faced each other in the 2009-10 Champions League group stage when Chelsea came out on top 1-0 through Nicolas Anelka’s second-half goal.