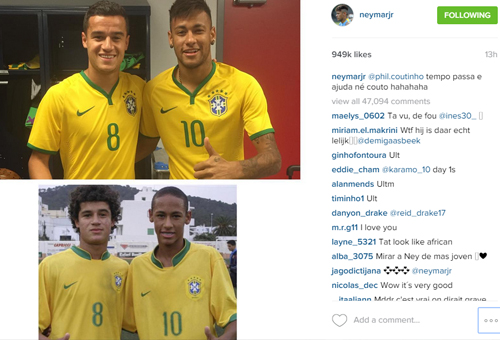 Neymar and Philippe Coutinho in a throwback snap Photo: Neymar/Instagram

Philippe Coutinho and Neymar appear to have barely aged after the Barcelona striker uploaded a throwback snap with the Liverpool midfielder.

The pair have blossomed into two of the best attacking players in Europe over the past couple of seasons and are currently members of Dunga’s Brazil squad.

Neymar scored on his Brazil debut in August 2010 aged 18 before Coutinho donned the green and yellow shirt two months later in a friendly against Iran.

And the Barcelona forward uploaded an Instagram post which contained a photo from the past and a current day image of the Brazil super stars.

Dunga’s Brazil were unconvincing 1-0 winners against Costa Rica in their friendly at the Red Bull Arena on Saturday.

Brazil will face the United States on Tuesday in Foxborough, Massachusetts, as part of its two-game friendly American tour.