Rafael Nadal enjoyed some downtime away from tennis over the weekend 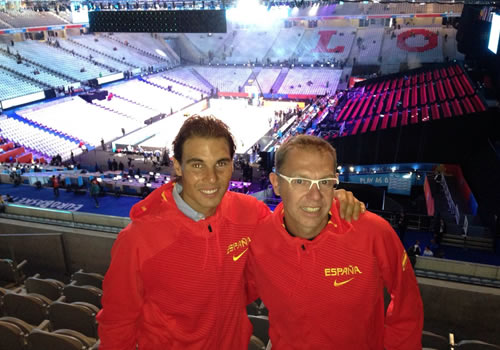 Rafael Nadal enjoyed some downtime away from the tennis court on Sunday as he enjoyed watching Spain cruise to their third EuroBasket title after dispatching Lithuania in Lille.

The Spaniard was in action for his country as they secured a 5-0 victory over Denmark in the Davis Cup’s second-tier relegation play-off over the weekend.

Nadal shared the picture above on his official Facebook page on Sunday and wrote: “In Lille supporting Spain, our team, this afternoon #ESPBasket”

Nadal was back in Spain’s Davis Cup team after a two-year absence and is now looking to end the season in positive fashion heading into the ATP World Tour Finals in London in November.

The 29-year-old was beaten by Fabio Fognini in the third round of the US Open earlier this month.

It was also the earliest that the Spaniard has been knocked out from the US Open since a third-round exit at the hands of American James Blake in 2005.