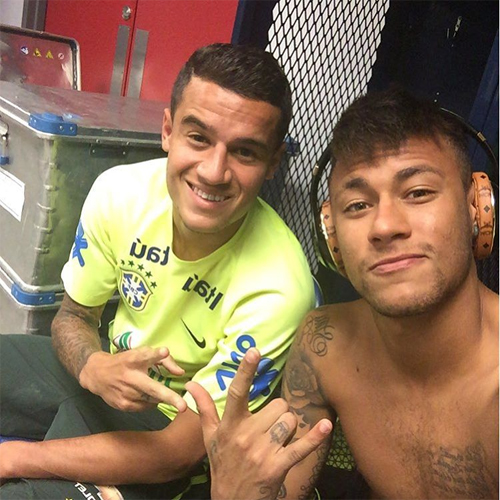 Philippe Coutinho joined Manchester United target Neymar for a selfie as the Brazilian pair caught up during the international break on Friday night.

The Barcelona forward emerged as a surprise big-money target for the Red Devils during the summer transfer window as United sought a marquee signing.

However, the speculation came to nothing as United opted for Monaco teenager Anthony Martial, who cost the Red Devils a princely sum of £36m.

And Barca striker Neymar is happy to leave the role of Brazilian “phenomenon” in the Premier League to his compatriot Coutinho.

Neymar wrote on his Instagram page: “With the phenomenon @ phil.coutinho ⚽️ #Treino”

Coutinho has made a mixed start to the new Premier League season.

The 23-year-old scored a brilliant long-range winner in a 1-0 victory over Stoke City at The Britannia in their opening game of the season.

However, Coutinho was sent off in his latest Liverpool game for two bookable offences in a 3-0 defeat by West Ham United at Anfield.

Robbie Savage: Why Man United will be lucky to finish fourth