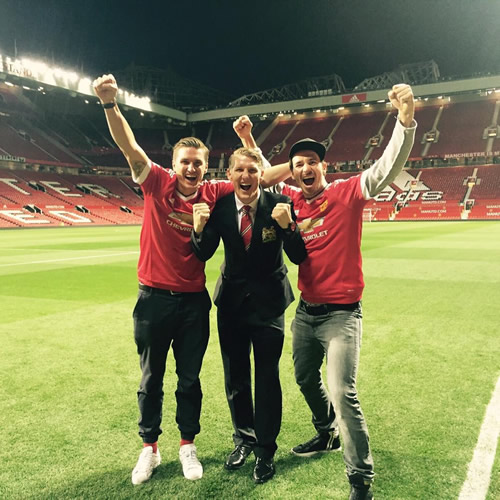 The Germany international played the full 90 minutes as goals from Daley Blind, Ander Herrera and debutant Anthony Martial wrapped up an impressive victory for the Red Devils over their local rivals.

Schweinsteiger was joined by his older brother Tobias and Alpine skier Felix Neureuther after the game for a picture on the Old Trafford pitch as the trio celebrated the victory.

The midfielder posted the picture above on his personal Instagram account and wrote: “Thank you so much for the fantastic support Tobias and Felix!”

After a goalless and uninspiring first half, United took the lead when Blind curled home from a free kick after being set up by Juan Mata.

Herrera made it 2-0 from the penalty spot after the Spaniard was brought down by Joe Gomez in the box.

Christian Benteke then pulled a goal back for Brendan Rodgers’ men late on with a superb overhead kick to set up a tense finale.

However, substitute Martial put the game beyond doubt when he surged into the box and slotted home a cool finish to wrap up the three points.