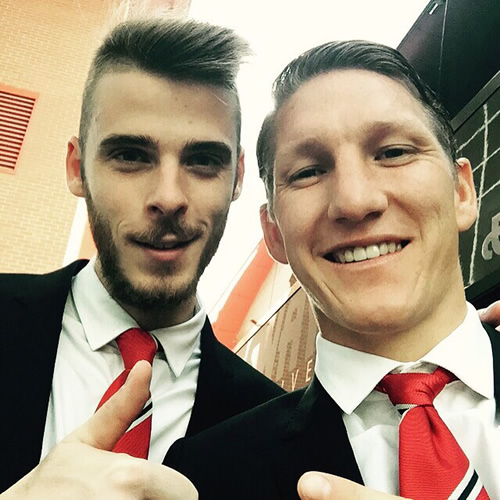 Bastian Schweinsteiger was all smiles as he posed for a selfie with David De Gea after Manchester United’s thrilling 3-2 win over Southampton on Sunday.

De Gea pulled off a string of superb saves to help Louis van Gaal’s men secure victory and move up to second place in the Premier League table.

And Schweinsteiger, who played the final 30 minutes at St Mary’s, was thrilled to snap a picture with United’s shot-stopper.

He posed the picture above on his Instagram account and wrote: “Second place in the table! Also thanks to David De Gea”

United fell behind in the 13th minute when Graziano Pelle smashed home a loose ball after De Gea’s superb save.

But Anthony Martial drew the Red Devils level 10 minutes before half-time with a neat turn and shot.

The 19-year-old summer signing from Monaco then took advantage of Maya Yoshida’s poor backpass to slot in a second five minutes after the break.

Juan Mata added a third in the 68th minute, before Pelle headed in a late second as United held on.