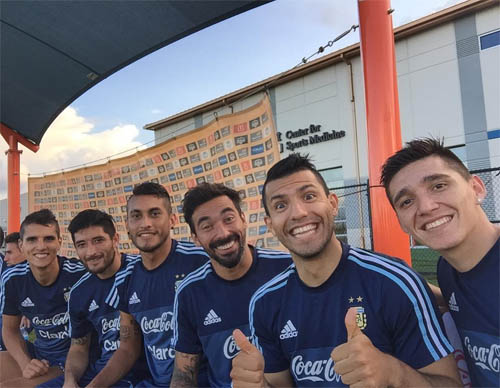 Sergio Aguero has posed for a snap with Tottenham Hotspur midfielder Erik Lamela after the Argentina squad meet up in Houston.

The Spurs playmaker was close to sealing a move away from the north London side on transfer deadline day after Ligue 1 side Marseille made a late bid to sign Lamela on loan.

However, Tottenham manager Mauricio Pochettino reportedly blocked Lamela’s proposed move to France after he had initially been speculated to be open to the midfielder’s exit.

And City striker Aguero orchestrated an Argentina selfie which included Lamela for an Instagram post on Wednesday night.

Aguero wrote on the photo-sharing app: “With the group after training! Come on Argentina!”

The 26-year-old forward, who moved from Atletico Madrid in 2011, has scored one goal in four Premier League appearances for table-topping City this season.

Lamela, meanwhile, has scored six times in 56 games in all competitions for Spurs after his club-record £30.75m move to White Hart Lane in 2013.