Photo: Vertonghen and Tottenham stars suit up for team snap 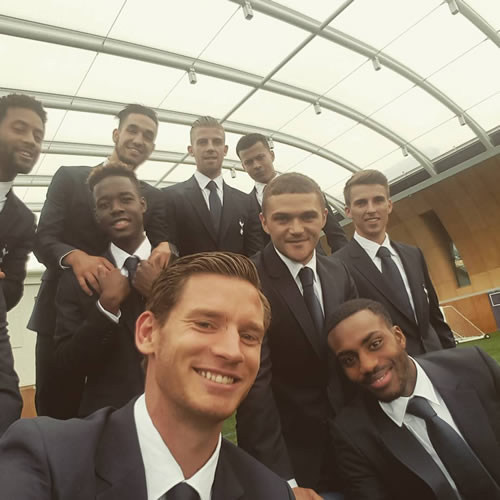 Jan Vertonghen and his Tottenham Hotspur team-mates looked to be in good spirits as they posed for a selfie during an official team photoshoot on Tuesday afternoon.

The Lilywhites are preparing to get their Europa League campaign under way this week following their 1-0 win over Sunderland at the Stadium of Light on Sunday afternoon.

Spurs take on Azerbaijan outfit Qarabag at White Hart Lane on Thursday night as they look to get their European campaign off to a winning start on home soil.

And Vertonghen looked to be enjoying himself as he snapped picture with team-mates Tom Carroll, Danny Rose, Nabil Bentaleb, Mousa Dembele, Toby Alderweireld and Dele Alli.

The Belgium defender posted the picture above on his personal Instagram account on Tuesday afternoon and wrote: “#teamfoto”

Tottenham, whose victory over Sunderland on Sunday lifted them up to 12th place in the Premier League table, next take on Crystal Palace at home in the top flight on Sunday afternoon.