The Brazilian striker was the source of much post-match debate after his involvement in a number of off-the-ball incidents during the derby clash in west London as Arsenal had Gabriel Paulista and Santi Cazorla sent off during the defeat.

Costa received a yellow card for a clash with Gabriel before the Arsenal defender saw red for kicking out at the Spain international. 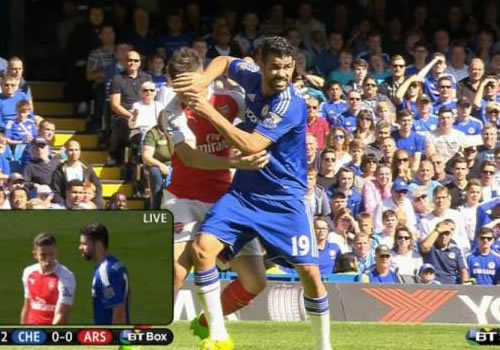 And the Gunners also had Cazorla sent off late on for a second bookable offence against Jose Mourinho’s men as goals from Kurt Zouma and Eden Hazard secured the victory for the Blues.

And although Arsenal shareholder Morgan was quick to lament the antics of Costa, he also admitted that the Arsene Wenger’s men could do with a similar player in their own team.

I just know Diego Costa is right now gnawing on a vast T-bone, calling it 'Grilled Gabriel' & chuckling to himself. The heartless savage.

Know the biggest problem I have with Costa? I wish Arsenal had an uncompromising, scrapping beast like him too. We're just too nice.

Arsenal take on Tottenham in the third round of the League Cup on Wednesday night.

Ander Herrera: My Man United target for this season