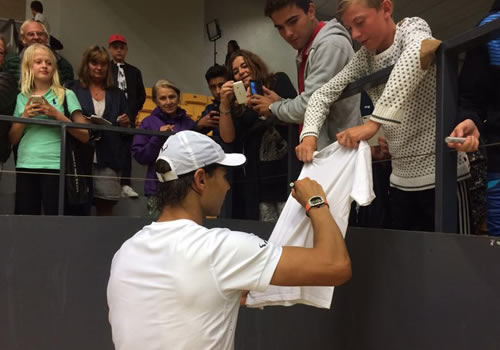 Rafael Nadal was quick to acknowledge his fans as he spent time signing autographs after a practice session ahead of Spain’s Davis Cup tie with Denmark.

Nadal will be in action for his country between 18-20 September as Spain try and cling on to their Zone Group I status.

The 29-year-old Spaniard, who was beaten by Fabio Fognini in the third round of the US Open earlier this month, posted the picture above on his official Facebook page and wrote: “With fans after practice!”

It was also the earliest that the Spaniard has been knocked out from the US Open since a third-round exit at the hands of American James Blake in 2005.

Nadal will be lining up alongside fellow Spaniards David Ferrer, Fernando Verdasco and Roberto Bautista Agut as Spain travel to Denmark in the coming days.