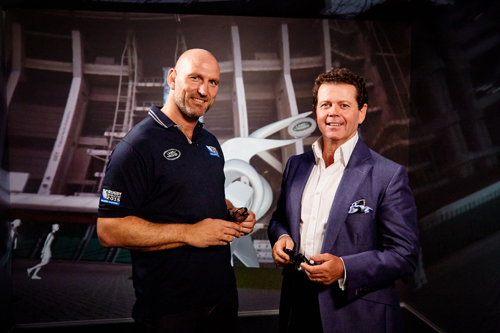 At first glance Stuart Lancaster’s current crop of England stars look as far removed from their all-conquering 2003 counterparts as possible.

But Lawrence Dallaglio – the only player to play every minute of England’s successful Rugby World Cup 2003 campaign – has reassured the Red Rose head coach that the similarities are certainly there.

Twelve years ago a tried and tested England side arrived at the Rugby World Cup safe in the knowledge that they had both form and familiarity on their side.

With seasoned players such as Dallaglio, Martin Johnson, Jonny Wilkinson, Jason Leonard and Matt Dawson to name a few to call upon, England were ranked the number one team in the world for two years.

Fast forward to the present day and only a handful of Lancaster’s starting XV for England’s Rugby World Cup 2015 opener against Fiji appear to be nailed on.

And while Woodward was able to call on several previous captains in his side, Lancaster’s class of 2015 has a very youthful look to it.

However, while a solid starting XV was England’s main strength back in 2003, the whole squad played their part – the likes of Mike Catt coming off the bench to turn a quarter-final clash with Wales around.

And Dallaglio believes the strength of Lancaster’s whole squad is similar to that which Woodward enjoyed back when England ruled the roost.

“I don’t think it is very fair to compare the 2003 England squad to the one we have now,” said Dallaglio.

“That side we had in 2003 was number one in the world and had just won the Grand Slam and beaten Australia and New Zealand in their own countries.

“Yes we had a settled squad and a few players tended to play more than others but it was still a competitive squad and I see a similar thing happening now.

“We had a lot in strength in depth actually and that is what you can see in Lancaster’s squad now. OK, the starting XV might not be as settled and experienced but that strength in depth is certainly there and that will be important.”

Land Rover ambassador Dallaglio was speaking after meeting with Land Rover’s Design Director Gerry McGovern to see the first design phase of ‘The Catch’, a piece of sculpture Land Rover is producing that will act as a meeting point for fans at Twickenham and the Millennium Stadium during Rugby World Cup 2015.

And for the former back rower he admits it has well and truly whetted his appetite for Rugby World Cup 2015 to get underway.

“I think ‘The Catch’ is amazing and it will really add something to the fans who flock to Twickenham and the Millennium Stadium,” he added.

“’The Catch’ focuses on the lineout which I think is a great thing because it combines all the aspects of rugby as you have precision, teamwork, timing, power – all of that.

“I can’t wait for it all to get going and this has only added to it for me and hopefully we can have plenty to celebrate when all is said and done.”

Lawrence Dallaglio is a Land Rover ambassador. ‘The Catch’ will live at Twickenham and the Millennium Stadium in Cardiff during the tournament and be a meeting point for rugby fans at both Rugby World Cup 2015 venues.