Does this stat prove that Anthony Martial is worth the fee Manchester United paid for him? 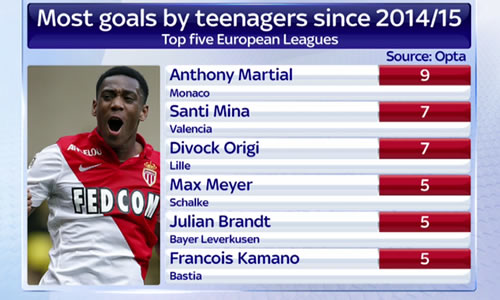 Is Anthony Martial a star in the making? Photo: Sky Sports/Twitter

However, this stat suggests that the Red Devils have recruited a star in the making.

The 19-year-old Martial, who joined United from Monaco last week, has scored more goals than any teenager across all of Europe’s top five leagues since the start of last season, with nine strikes to his name.

The stat was revealed on Sky Sports‘ official Twitter feed and will go some way to justifying the hefty fee United are believed to have parted with to sign the youngster.

Martial has scored more league goals since the start of last season than any other teenager across the top 5 leagues. pic.twitter.com/3ZepxTkOCI

Martial was unveiled as the Red Devils’ new number nine last week after his move to Old Trafford from the Ligue 1 outfit.

He could be in line to make his United debut when Van Gaal’s men host Liverpool at Old Trafford in the Premier League on Saturday afternoon.

United are looking to return to winning ways after the disappointment of their surprise 2-1 loss to Swansea City last weekend.