Do these stats show that Manchester United are no better off under Louis van Gaal? 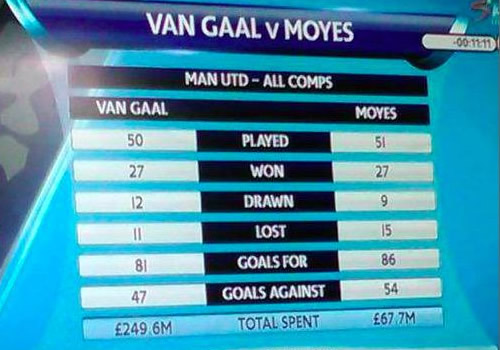 Do these statistics suggest that Manchester United are no better off under Louis van Gaal than David Moyes?

There has been much debate about how successful the Red Devils have been under the Dutch manager since his appointment as the Scot’s successor at Old Trafford last summer.

Van Gaal successfully led Manchester United back into the Champions League with a top-four finish last season, but has splurged a staggering £181.9m more than the former Everton boss in the transfer market.

Now, these stats show that Van Gaal has won exactly the same number of games as Moyes during his spell in charge at Old Trafford, and his side have scored less goals.

United are currently fifth in the Premier League table after slumping to a surprise 2-1 loss to Swansea City in their last top-flight outing.

The Red Devils return to top-flight action when they host Liverpool at Old Trafford after the international break on 12 September.

Who are Man United better off with?

Robbie Savage: Why Man United will be lucky to finish fourth