Tom Abell’s performances this season earned him the LV= Breakthrough Player Award for 2015 and former England batsman Mark Butcher is convinced the Somerset opener is on track for international honours.

Abell saw off seven other nominees, including the likes of Surrey’s Tom Curran and Yorkshire’s Jack Leaning, to win the award voted for by the fans.

The 21-year-old has had an impressive summer at the top of the Somerset order, notching over 700 first-class runs while also scoring his maiden first-class century against Hampshire earlier this month.

Joe Root was the inaugural winner of the LV= Breakthrough Player Award in 2012 and has since gone on to establish himself as one of the best batsmen in the world.

And as England’s search for a long-term answer alongside Alistair Cook at the top of the order continues, Butcher – who scored eight centuries in 71 Test matches – believes Abell is on the right trajectory to throw his hat in the ring.

“I think Tom has a really good chance of going all the way, it’s incredibly early days to be making a solid judgement on that, as the second season is often a tricky one for many players,” said Butcher.

“How he copes with that will tell you a lot about his mental aptitude to first-class cricket, and if he continues to churn the runs out, and England continue to have difficulty finding a permanent opening partner for Alastair Cook, then he puts himself in a good position. 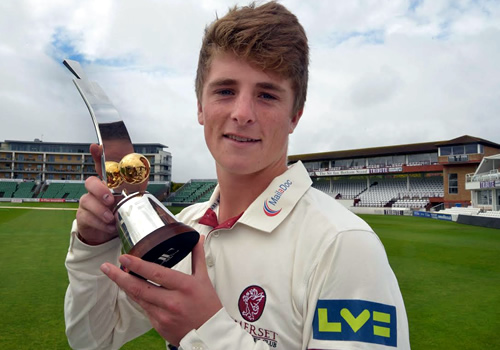 “It’s a boon for Tom to think three or four years ago Joe Root was a youngster in a similar position, impressed a few observers, won the LV= Breakthrough Player Award, and now look at him – he’s one of the very best players in the world and that would only encourage Tom.

“Observers will talk about his footwork, which looks pretty crisp, and technically he looks very sound. A lot of people have been very impressed with him, myself included, so it’s thoroughly well-deserved award.”

The Taunton pitch is notoriously batsman-friendly but even with the often benign conditions, Abell has particularly excelled.

Butcher is convinced that playing alongside an old hand such as Marcus Trescothick atop the order will have done the youngster the world of good but is keen to see him recreate that form next year.

“I think opening the batting with someone like Marcus Trescothick will be a help for sure,” added Butcher.

“Also playing on generally good surfaces down at Taunton will give a player a really good grounding in terms of their technical proficiency.

“It’s a real boost to anybody, at such a young age, to win an award like the LV= Breakthrough Player Award.

“It does bring with it its own pressures, because obviously people will be more aware of Tom.

“In their team meetings, they’ll be talking about ways to get him out and so there is extra pressure there, particularly with the second season syndrome. It will be very interesting to see how he reacts to that.”

For more reaction and a look back at this season’s LV= County Championship visit LV.com/cricket