Which clubs benefitted most from fluctuating exchange rates this summer? Check out moneycorp's guide..

From big money fees for want-away midfielders such as Angel Di Maria to the high-profile international deals made by Chelsea and Manchester City, Premier League clubs have once again been flaunting their cash in a bid to bolster their squads for the 2015/16 campaign.

This summer has also seen a strong performance from the British pound, which has meant that English clubs have benefitted considerably from their overseas transfer deals compared to previous windows. 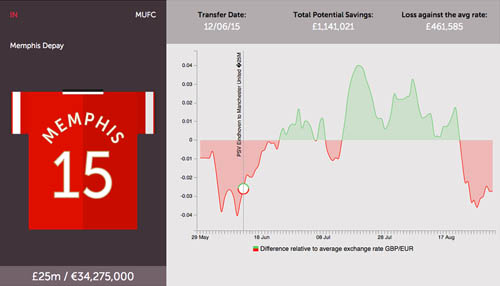 Man United could have saved some cash Photo: Moneycorp

However, despite the rampant selling and spending, when it comes to keeping tabs on fluctuating exchange rates, there are some clubs who have appeared to be a lot shrewder than others. This summer the GBP/EUR exchange rate saw a period high of 1.437 and a period low of 1.357, which means that if continental deals were timed right, English clubs could have saved millions of pounds on their overseas payments. 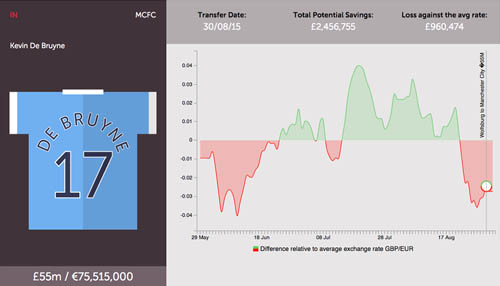 Memphis Depay’s transfer from PSV Eindhoven to Manchester United failed to take advantage of favourable GBP/EUR rates. The £25,000,000 fee was agreed on 12 June when the exchange rate was 1.371, which was far less than the transfer period’s average rate of 1.397 and optimum rate of 1.437. The club therefore lost out on£1,141,021 of potential savings as the deal was conducted too early in the window.

As you can see, Kevin De Bruyne’s transfer from Wolfsburg to Manchester City failed to capitalise on advantageous GBP/EUR rates. When the £55,000,000 fee was agreed on 30 August, the exchange rate was1.373 which is considerably lower than the average rate (1.397) and way lower than the optimum rate for the period which was 1.437. City therefore missed out on £2,456,755 worth of potential savings had the transfer been timed better. 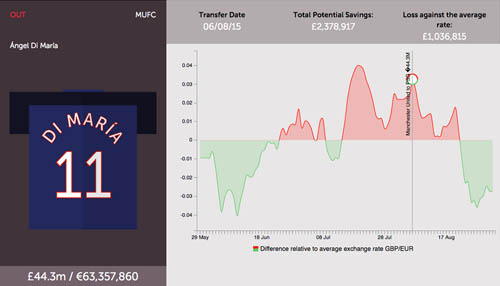 The above findings have been put together by foreign exchange specialists at Moneycorp. You can check out the rest of the piece here

Paul Merson: Why Arsenal are cheating their supporters