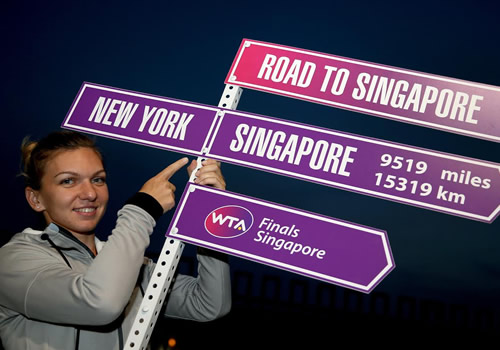 Simona Halep has qualified for the season-ending tournament Photo: WTA

Simona Halep has qualified for the WTA Finals in Singapore for the second consecutive year.

She joins world No1 Serena Williams in the singles field of eight, with six more spots yet to be determined.

World No2 Halep will be making her second consecutive appearance at the WTA Finals, after reaching the final in 2014.

The Romanian finished at the top of the Red Group in 2014 with a 2-1 record, which included a statement 6-0 6-2 win over eventual champion Serena Williams.

Halep defeated Agnieszka Radwanska in the semi-finals and ultimately finished runner-up in a rematch against Williams in the final.

Halep’s season has been highlighted by three WTA titles: her biggest to-date at the BNP Paribas Open in Indian Wells, along with the Dubai Duty Free Tennis Championships and Shenzhen Open.

The Romanian also reached the final at the Rogers Cup in Toronto and Western & Southern Open in Cincinnati and the semi-finals at the Miami Open and Internazionali BNL d’Italia in Rome.

“I am so happy to have qualified for the WTA Finals in Singapore again, as it has been one of my goals for this year,” said Halep.

“Last year at the WTA Finals I had a great result, reaching the final and beating Serena in the group stage, and I will try my best to do even better this year.

I have had a great season so far with many fans supporting me around the world and I hope to see many more fans this October in Singapore.”

US Open 2015: Fabio Fognini fires up to deny Rafael Nadal with late-night flourish