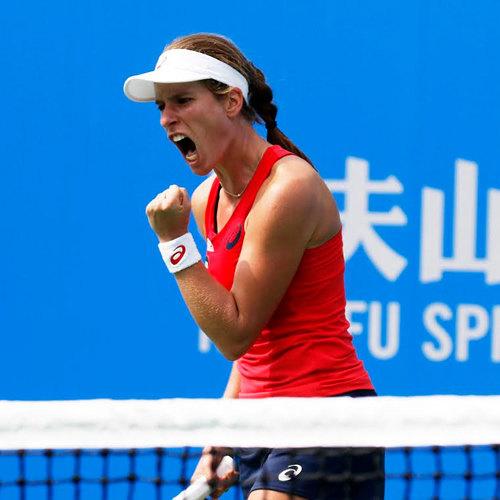 When the 24-year-old, 5ft 11in Johanna Konta hit the grass of home in June, she was still ranked outside the top 140, but it soon became clear that it would not be long before she broke the top 100.

The promise was there for all to see from the moment she won her first Grand Slam main-draw match in 2012, but it had taken her time to mature into the confident player that re-emerged this season—most notably, as luck would have it, in her home town of Eastbourne.

There, she reached the quarter-finals via wins over the No8 ranked Ekatarina Makarova and then Garbine Muguruza, and even took the first set from Belinda Bencic.

It was evident that Konta was in a new place, helped, she said, by a sports psychologist to overcome nerves that had so often gripped her in high-pressure moments. She explained later, in New York: “I think enjoyment is a big factor, yes enjoyment—enjoying the good and the bad, the easy and the hard, being able to roll with the punches a bit better.”

She had the misfortune to draw Maria Sharapova in the first round at Wimbledon, but fast-forward to the hard courts of Canada, and Konta put together back-to-back ITF titles in Granby and Vancouver, again beating higher ranked players.

By the US Open, she had broken the top 100 but still had to qualify. No matter: she won those three matches to join the main draw and, three years after that New York debut, won her second ever Grand Slam match—and a whole lot more. As luck would have it, she met the now-ranked No9 Muguruza in the second round, and once again Konta emerged the winner of an epic three-setter, played in punishing conditions.

Not content with that, Konta would play seven matches in New York, finally succumbing to No4 seed Petra Kvitova in the fourth round, but not before beating No18 seed Andrea Petkovic. And a month later, having risen to No66 in the rankings, Konta would face Petkovic again in her first match back.

The Wuhan Premier has quickly established itself as one of the most prestigious stops on the women’s tour, a highlight of the Asian swing. So the competition is fierce, and Konta was drawn in a quarter topped by No2 Simona Halep and Agnieszka Radwanska but also containing two unseeded former Grand Slam champions and world No1s, Venus Williams and Victoria Azarenka.

In the first round, beating Petkovic again in straight sets, it was obvious that Konta had lost none of her form. As a qualifier, she had played and won two matches already to take her run to 18 wins from her last 19 matches. Petkovic made it 19 from 20, but now she faced the formidable Azarenka, unseeded only because of her recurrent injury problems last year.

The two-time Australian Open champion played in Melbourne this year ranked 44, but gradually gained points and ground so that, with her quarter-final runs at Wimbledon and the US Open, she was closing on the top 20 again.

But once again, Azarenka was having physical problems. A left thigh injury forced her to retire in the third round of Cincinnati, so when she emerged to play Konta with strapping around the same thigh, alarm bells rang.

The problem had recurred during her first match against Lauren Davis, and straight away it was apparent that it still hampered her against Konta, especially with the Briton in such strong form. Konta broke immediately, and resisted some big ball-striking against her own serve as Azarenka tried to keep rallies short. The Briton served out the set with an ace, 6-4, after an hour of play.

Azarenka looked totally downcast as she called for the trainer, and her body language suggested that she expected little relief from the extra tape added to her strapping. Sure enough, Konta broke in the first game of the second set and Azarenka retired.

It may not have been Konta’s greatest victory, given the circumstances, but it took her tally of wins to 20 from 21, and took her to a possible shot at top seed Halep, who takes on Anastasia Pavlyuchenkova. Beyond that, and she could be facing one of the greatest players of recent years, Venus Williams, who has sailed past Radwanska and Julia Goerges this week.

Even if Konta falls short of the quarter-finals in Wuhan, though, she has marked one milestone in the Chinese city. With Heather Watson losing her first-round match against Jelena Jankovic, Konta will become the British No1 for the first time. And with almost no points to defend for the rest of the year, Konta may continue to rise before the season is out.

Elsewhere Bencic, the losing finalist in Tokyo on Sunday, retired in her second-round match against Camila Giorgi, and Jankovic fell to No6 seed Angelique Kerber, who becomes the only remaining seed in the bottom quarter of the draw.

No4 seed Caroline Wozniacki lost in a final-set tie-break to unseeded Anna Karolina Schmiedlova, who will next play either Ana Ivanovic or Muguruza. These two popular players dropped just five games between them to set up one of the matches of the tournament.

In the top half, No8 seed Karoline Pliskova beat Mirjana Lucic-Baroni to set up a meeting with No12 seed Elina Svitolina, and Roberta Vinci, making her first appearance since reaching the US Open final, will take on Kvitova after defeating Irina-Camelia Begu.