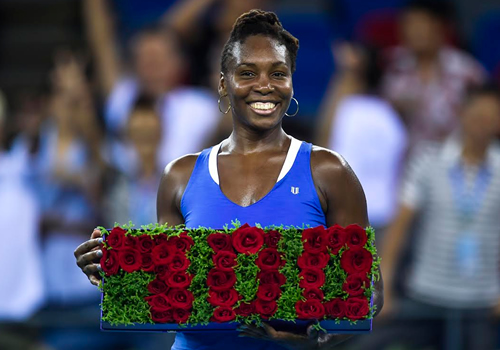 Venus Williams may be unseeded among this week’s top-quality field in Wuhan—she is currently ranked at just 24—but there is no denying the stature of the 35-year-old American when it comes to the big stage.

Appearing for the first time since her quarter-final run at the US Open, where she took sister Serena to a tough three sets, the elder Williams sister backed up her opening-round win over Agnieszka Radwanska with another straight-sets victory, this time over Julia Goerges. And that took her to a very significant milestone, her 700th match-win.

After the match, Williams received roses shaped into the number 700 from tournament directors of the Dongfeng Motor Wuhan Open, but admitted that she had been unaware of the auspicious number.

“I didn’t know. I’m glad nobody told me before! I would have been a little bit nervous.

“It was a good match, a quality player. I had never played her before, so that was also an experience in itself.”

She added: “Who doesn’t like winning? You know, that never gets old… [But] I was thinking, ‘How long would it take me to get to 800 now?’ Maybe that was my first thought!”

Williams is only the second active player to reach 700 wins—after sister Serena passed the same milestone earlier this year en route to the Miami Open title.

Women in the Open Era to reach 700 match wins

If Venus is to make it 701, she will now have to beat No7 seed Carla Suárez Navarro, who beat Monica Niculescu, 5-7, 6-3, 6-4. Suárez Navarro leads Williams in their head-to-head, 3-2, and won their only meeting this year.

Also in the top half of the draw, defending Wuhan champion Petra Kvitova battled through two and a half hours to beat rising star Daria Gavrilova from 3-5 down in the third set, eventually winning 6-3, 4-6, 7-5.

Kvitova admitted: “I don’t know how I won it. I think these kind of matches are important, to get the confidence to know that if you are not playing well and you are not 100 percent ready that you can still win. That’s a good sign.”

Meanwhile, at the top of this packed half of the draw, No1 seed Simone Halep was an impressive winner over Anastasia Pavlyuchenkova, 6-2, 6-1, and next plays British qualifier Johanna Konta.