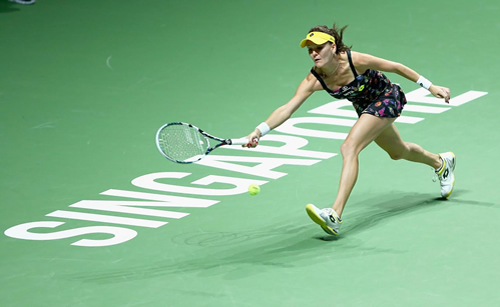 She joins Simona Halep, Maria Sharapova, Garbiñe Muguruza and Petra Kvitova in the singles field of eight, with four more spots yet to be determined.

Radwanska will make her seventh appearance at the WTA Finals, where she has twice reached the semifinals – in 2012 and 2014.

Last year, she defeated Kvitova in the round robin stage and advanced out of the group, eventually falling to Halep in the semifinal.

She first competed at the WTA Finals as an alternate in 2008 and 2009 and has since qualified as part of the top eight for five consecutive years (2010-15).

“I’m excited to play at the WTA Finals in Singapore this year,” said Radwanska.

“I have good memories from playing in Singapore. The fans there are amazing, so I can’t wait to get out there and compete against the best players in the world.”

She also reached the finals at the Aegon International Eastbourne and the semifinals at Wimbledon for the third time in the last four years.

Upon booking her spot at the WTA Finals, Kvitova said: “I am so excited to qualify for the WTA Finals for the fifth straight year.

“I’ve been through some tough moments this season so I’m extra proud of myself for qualifying again and making it back to Singapore.

“Playing as one of the top eight is a big goal for me each year so I can’t wait to be back there, fighting hard and hopefully playing some great tennis in front of the Singaporean fans.”